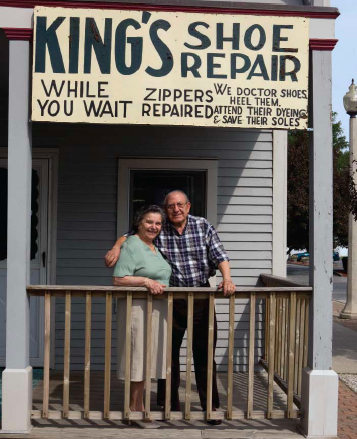 A Short History of Love & Shoes

Way back in 1958, Anthony Napolitano was polishing a customer’s shoes in a Bennington cobbler shop when he heard the news that the most beautiful woman in the world was arriving in New York Harbor. Without hesitation, young Tony put on his best suit of clothes and got his brother to drive him to the city to make sure he was there when she walked down the gangway. His mind was full of dreams of holding her in his arms and never letting go.

To make a long story short, Rosa was the last person off the boat. To make a short story long, one has to talk about family, Italy, immigration, the Great Depression, World War II, honest work and good fortune.

In the early 1900’s, Tony’s parents emigrated from Italy to work on America’s railroads. But in the 20’s, when the work dried up, they left their three American-born children with relatives in upstate New York and returned to the little town of Moiano, southeast of Naples. There, Mrs. Napolitano gave birth to another son; Anthony. The year was 1927.

In the Depression, Anthony’s brother Domenico—sixteen years older—found work in a Troy, New York hardware store. One day in 1936, a wealthy Bennington businessman named King came into the store, asking where he might find a good shoe repairman and, having apprenticed for a cobbler, Domenico offered to repair Mr. King’s shoes right there. Mr. King was delighted with Domenico’s work. The way Tony tells the story, Bennington needed a shoe repairman and Mr. King set his brother up in business in the Feinberg Building on Main Street. To seal the good fortune, he filled the shop with state of the art machinery. All Domenico had to do in return was to call the business King’s Shoe Repair. In a time when repair of all things was preferable to buying new, the business thrived. It didn’t hurt that Domenico was also a ‘people person.’

Tony continues, “When I was just 18, right after The War, I graduated from the Police Force Academy of Torino. I tell you, it was a dangerous time to wear a uniform.” He explains that, stinging from years of fighting and a humiliating defeat, Italians were both hungry and angry. Crime was rampant, and both ordinary people and the syndicate families took their anger out on policemen. Many were murdered.

In 1953 synchronicity struck. Tony’s contract with the police was due for renewal and Domenico’s partner in King’s Shoe Repair decided to leave the business. It being time to have his own shop, Domenico bought a building around the corner on North Street. It had two apartments above and he wrote a letter to Tony asking him to come to America.

“Growing up in Italy,” Tony says, “I kept hearing about brothers and sisters in America. And I didn’t want to be a policeman any more, so I told him, ‘Okay.’”

A small problem developed while Tony was waiting for his immigration paperwork; he met the most beautiful woman in the world. So what’s a man to do? For Tony it was a no-brainer. He married Rosa and—it being true that love makes people blind—she was willing to live with his parents, while he took the boat to America “to check it out.”

At first Tony shined shoes all day long. “Everybody had their shoes shined in those days.” He waves a hand toward the shoeshine bench, which still dominates one wall of the shop on North Street. It’s big enough to seat three customers at once. “We were open on Sundays. It was a big day, because people came in before going to church.” After three months, Domenico started Tony working with the machinery, and he loved it. 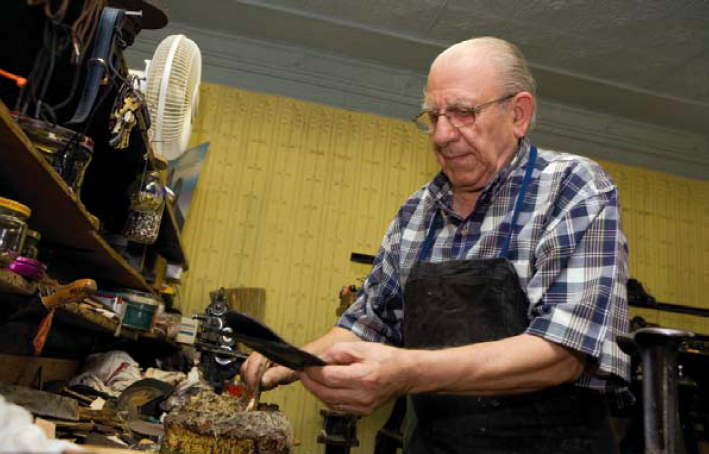 Two years passed. When Tony knew he would stay, he sent for Rosa, but with all the paperwork it took another eighteen months for her to arrive.” Rosa, a sweet woman with a warm smile, joins us. “I didn’t know a word of English and I hadn’t seen him for almost four years. I was nervous. That’s why I took so long getting off the boat.” That, and the fact that she had to carry all the baggage for two people. You see, she brought her daughter Maria, almost three years old, to meet her father for the first time.

“The policeman on the dock told me, ‘Sir you can’t go through there,” says Tony about seeing Rosa on the gangplank. “Well, I pushed right by him and ran over. And we’ve been together ever since. Fifty-one years. We moved right upstairs into the apartment next to Domenico.” The brothers worked together for ten more years, until 1968, when Tony bought the business and the building. He and Rosa remodeled the upstairs into one apartment that has served as their home ever since.

Downstairs, however, King’s Shoe Repair looks the same as it did in the fifties; old wood floors in the open area where you walk in, the shoeshine bench where conversations of joy, gossip and politics echo from the past. The shelves for new shoes anchor the far wall and, of course, there is a special green chair where patrons sit to have their feet sized. A high service counter cuts the room in half and, behind it, a modern cash register (from the sixties) shares space with a workbench worn from countless repair jobs. Its surface is buried in tools of every sort, thread, pieces of leather, an anvil and a vise. Behind that, the massive, black machinery from 1936 still hums like a Cadillac. In the adjoining room are several stitching machines. The tasks lie there as they did at the end of the day on Saturday ready for a man to pick up on Monday.

Tony and Rosa finish each other’s sentences. “He works all the time,” Rosa says. “I tell him he should slow down.”

Tony rolls his eyes good-naturedly. “What would I do up there?” he says pointing at the ceiling—the floor of his apartment. “I love to work. I got to keep moving.” Rosa smiles and nods. The love of a twenty-year-old Italian beauty still fuels the gesture. “I love repairing things for people.” His hands show his excitement. Beautiful workman’s hands. Strong and flexible, though he confesses that they’re a little stiff these days. “You name it, I can fix it. Hammocks. Suitcases. Tents. Anything. It makes me feel so good.”

“Baseball gloves,” Rosa says. “And harnesses. He sharpens skates, too.”

“That’s right. Things were slow once, so I figured out we could pick up a few bucks by doing skates.”

Rosa is comfortable in the shop, but she says ‘no’ when asked if she repairs shoes, too. “I do other things. I do tailoring and special projects. On the machines out back.” Her favorite is an old Singer treadle sewing machine, much older than either her or Tony. 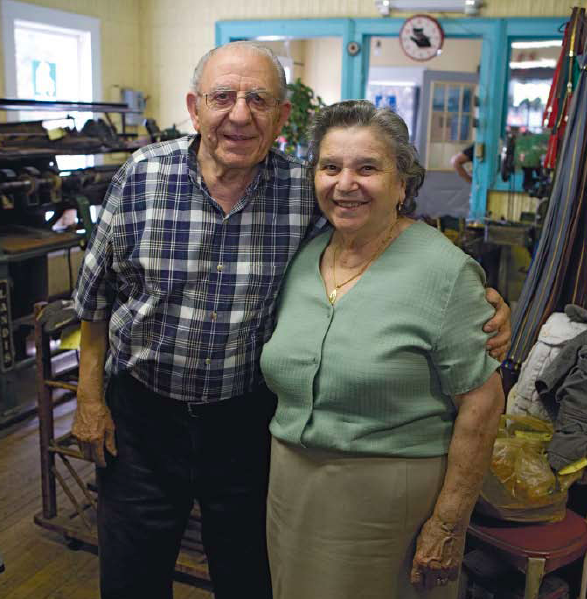 “She replaces zippers,” Tony says proudly. “The heavy duty metal kind, on boots that come in and winter jackets.”

When conversation turns to the shoe business today, Tony explains that the quality of shoes is terrible. America sends its best leather overseas so foreign craftsmen can make fancy shoes for their own people. “And we buy the junk they make,” he says shaking his head. “You wouldn’t believe what they use in shoes nowadays. Plastic and cardboard. But, of course, I repair whatever people want. I once had a woman come in who said, ‘I can’t bear to throw out these slippers. They feel so good.’ They were just cloth and cardboard. Falling apart. There was nothing there, but I fixed them. I gave them back to her better than when they were new. She was so happy.”

As for the current recession, Rosa says that actually more people are coming in now than usual. And Tony shows no signs of wanting to retire. In fact, his goal is to become the oldest shoemaker in the history of the United States. But about the long-term future, they grow quiet. Neither can see it with clarity. Only a handful of people in the state repair shoes nowadays. “We would love to have some young person come in and learn the trade, Tony says, but it’s hard work. You have to be strong, and persistent and take pride in what you do. You have to be personable and be a problem solver.” He looks out the window as if trying to see a viable candidate. “The hours are long, and young people want to make a lot of money. You don’t make a lot of money in shoe repair.”

They agree on the keys to a successful business: service and honesty. “If you tell them it will be ready Tuesday,” Tony begins, “it has to ready Tuesday.” And Rosa finishes, “Otherwise they won’t come back. We’ve never needed to advertise; our customers do it for us.”

Tony recalls, “One day a woman called about losing her wallet somewhere in town. She had left it on the counter and I told her I was holding it for her. It was full of money. A year later she told me that she was surprised to see that money.” He smiles. “You have to treat people right. And people like to be greeted when they come in.”

Let’s be honest. Warmth is not a problem for Tony and Rosa. Talking with them feels like the prelude to sitting down for Thanksgiving dinner. “The best part of the business is the people. It’s like a big family. You have to understand, we don’t have much family here. So our customers are our family. We are still devoted to Italy and to the old ways, but Vermont has been good to us. We love this state. We love being here.”