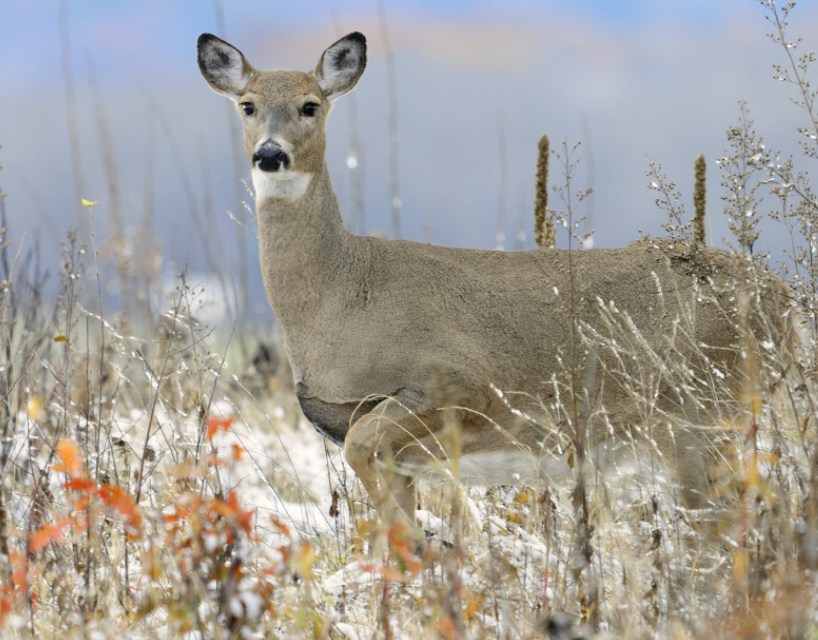 Writing near the south windows in full grey winter light. Movement outside interrupts my spell, draws my eyes. A large deer is halfway through a full summersault on a twenty-foot arc heading for the middle of my garden. A scene and posture never witnessed in nature.

The deer does not land. It collides with earth. Front legs buckle in a way that spells tragedy. Neck and chin land hard. I’m up, eyes burning. No horns, so a doe. Must have caught a hoof on my fence, running full tilt. But why? She tries once to rise. Unable, she looks back up the hillside whence she came.

The answer. A huge coyote is turning away from the evil smell of the human’s house. Glorious fur. He has been eating well. Not enough snow this winter to slow his hunting. But his prey can gallop too. Faster than him. But now, a drama literally lands fifty feet from me. He slips out of the clearing.

She sees him go. My stink has saved her. Through relief or faint she collapses, prostrate. She too has eaten well. Her huge body heaving for breath. Steam rising from her flanks.

I see him. He’s merely hiding behind the first line of plant stems. Weighing the push-pull of food versus instinctive caution. Will he dash in and gut her in my sight?

There are no guns here. Because the law of nature always works. Both species carry on in the presence of the other. Sometimes in spring I find cadavers of both. But she has only one defense—fleetness of foot. And she is out of the game. If he dares break the rules, she will be the one to die today. Unless…unless she is merely stunned. I’ve seen miracles. Birds dead after bashing my windows in summer come to and fly away. If so, is it existentially wrong to protect her while she’s vulnerable. I answer by seizing my fire poker, ready to intercede with shouts and wild dancing. But she will fear me too. To not drive her to him I hover inside the French doors.

He appears for a moment in the swamp near the low spot in the fence. And turns again.

It’s breath she needed. And lying still summons death, so she tries to rise. Finally, she’s up but limping. Wheeling inside the fence. She senses the danger in entrapment too. Her push-pull. Stay stuck or jump out and into his teeth.

Her front left leg falters. Bleeding. Broken perhaps. No, it’s worse. I see it now. The pelt hangs free. He caught her on the run and ripped hard. De-gloved the leg. Muscle exposed all around. The EMT in me doubts even a vet can save her.

She collapses again where the broccoli stood. Seems resigned to stay. Resting. Pondering, in her way.

I wrestle with Nature’s justice, of which I am part. Coyotes coming after dark, breaking their own instincts to eat close to a house is wrong for them too. In our own ways, the doe and I finally agree. She cannot leave and she cannot stay. I call a game warden. She’s an hour away, she says.

I wait, fire poker by the door, just in case. At last, the doe struggles up and I pray she is well-enough to leave. But no. Before I do, she has seen the game warden. The biped form triggers her species’ bone/mind wisdom to Flee! I share a few words with this tiny human who holds a rifle as easily as I hold my hoe in summer to turn the earth out where my doe senses her few options. That must be what she ponders, her wisdom beyond words. With matter-of-fact attention, she struggles with her infirmity.

At the first shot, she bolts like a healthy deer up over the fence that tripped her. Inside, I cheer. Now free, though, she seems at ease, in no hurry to run. The next shot perplexes her sense of body. She shakes and spins, falls down. But she is up again, bad leg and all. I hate this game. My push-pull. Third shot lays her down. The tiny person walks over and finishes her. Not in the head, which would be disrespectful.

I do this all the time, she says, as she turns to get her pulling rope to take the carcass to the food bank. In her absence, I kneel next to my doe. I sense the last little life in her. And just as I did once before with a buck who had escaped a pack of coyotes only to lie down in my yard two hundred feet from here to watch his guts pour out the hole they had torn in him, I lay my hands on her beautiful body. On her perfect hide, shush her. Stroke her neck. Tell her in words she can’t understand—so for my benefit, then—that she is beautiful and that I am sorry. And that she is so beautiful.